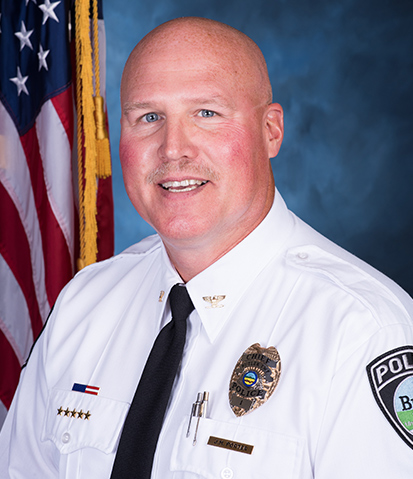 A MESSAGE FROM OUR CHIEF OF POLICE

"Welcome to the Butler Township Police Department! In 2016, I was hired as the Butler Township Chief of Police, after retiring from the City of Trotwood. I started my career in public safety in 1981 at the age of 18 with the Trotwood Rescue Unit Inc., as an EMT. At the age of 20, I began dispatching for Madison Township – now the City of Trotwood. Once I turned 21, I joined the ranks of the Madison Township Police Department as an Auxiliary and Part-time Police Officer, and in 1989 accepted a full-time position with the agency. During my tenure with Madison Township and the City of Trotwood, I worked my way up through the ranks as a Detective, Sergeant, Captain, and retired from the city with 27 years of service as the Deputy Chief of Police.

Upon joining Butler Township, the police department was on the cusp of extreme financial cuts and had been threatened with the possibility of being disbanded with services being outsourced to the county sheriff’s office. After almost 15 years of levy failures, and through the hard work of the officers and citizens, a new levy was passed in November of 2016 which allowed the township to stabilize the police department.

Since the passage of the levy, it has been the township’s goal to update the police department’s equipment. Cruisers are now equipped with updated in-car computer systems that allows officers to have access to real-time crime fighting information. Officers are also equipped with state of the art body-worn cameras, which protects both the officers and the citizens, holding each accountable to complaints and providing valuable evidence for court proceedings. Additionally, the township has made it a priority, to increase police staffing, in an effort to provide additional coverage for the township. I am very proud to protect this community and serve the residents of Butler Township. Please feel free to contact us should you have any questions, needs or concerns."

The Butler Township Police Department is committed to providing the highest quality of professional services to the citizens of the community. We achieve this standard through careful selection of personnel, rigorous training, modern practices and state-of-the-art equipment.

The department provides a variety of police services to our residents, businesses, and visitors. The backbone of the department is the Patrol Division. In addition to preventative patrol, these officers perform traffic enforcement, conduct preliminary investigations, vacation home checks, business checks, evidence collection, and participate in community policing activities and neighborhood watch programs.

The department contracts with the Huber Heights Police Department for dispatching services. If you need an officer to respond to your home, business, or other location, please call the Dispatch Center at 911 for an emergency or (937) 233-2080 for a non-emergency situation.

For Police Records, dial (937) 890-2671, or email us at police@butlertownship.com, to request a copy of a report. In general, most reports can be emailed (preferred method), faxed, or picked up at our offices. We recommend you contact us before coming to pick up the records to ensure they are ready.

Crash Reports are available for download on our Crash Reports page. Please look for the year and month that your crash occurred. Within the folder, you will find the crash reports listed by report number with the last names of the involved parties.

The department is committed to reducing traffic crashes and injuries by enforcing traffic laws. If you have a concern about speeding cars or other traffic issues in your area, please contact the Lieutenant at (937) 890-2671, ext. 1235, or via email at police@butlertownship.com. We will add your area to our Selective Enforcement program. When time and calls for service allow, officers will spend extra time in the area watching for traffic violations.